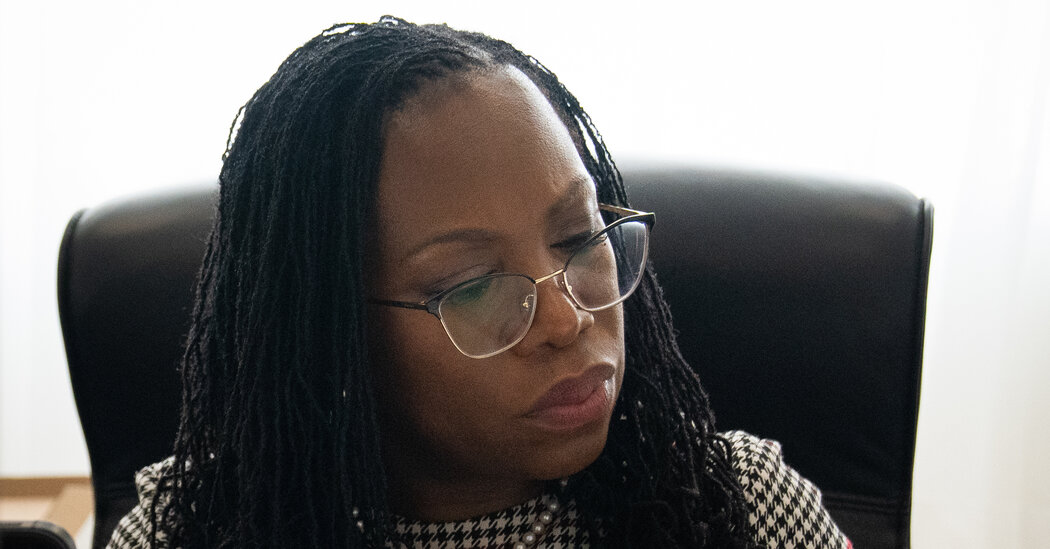 Less than two hours after the Supreme Court ended a wrenching term last month, it welcomed a new member. Justice Ketanji Brown Jackson, who had been waiting in the wings since she was confirmed by the Senate in April, took two oaths of office — and joined a court in turmoil.

“She’s entering the court at a time of just crazy polarization after a very momentous term and after this huge leak from the spring,” said David Lat, a legal commentator, referring to the disclosure in May of a draft opinion overturning Roe v. Wade, which closely resembled the decision last month that did away with the constitutional right to abortion.

“I’m sure her colleagues will be very welcoming to her, but there may just be a lot more circumspection around the building,” said Mr. Lat, the author of Original Jurisdiction, a newsletter about the law and legal profession. “It could be a little weird.”

In joining the court, Justice Jackson returned to a familiar setting. She had served as a law clerk to Justice Stephen G. Breyer, whom she replaced, in the term that ended in 2000. But that was a very different time — and the differences illuminate both the extraordinary transformation of the institution and the challenges its newest member will face.

In an end-of-term overview that July, The New York Times’s Supreme Court reporter, Linda Greenhouse, asked John G. Roberts Jr., then a prominent lawyer, for his assessment of the court’s major decisions.

“Which cases were most visible to the public this year?” asked Mr. Roberts, who would become chief justice five years later. “Probably school prayer, abortion and Miranda, and the conservatives lost all three.”

The term that ended last month also featured cases on school prayer, abortion and Miranda. This time around, though, the conservatives won all three.

The court in 2000 was about halfway through an 11-year stretch without any changes in personnel, the second-longest such period in its history.

It was by most accounts a happy place. That too has changed.

“This is not the court of that era,” Justice Clarence Thomas said at a conference in Dallas two weeks after the leak, adding: “We actually trusted each other. We may have been a dysfunctional family, but we were a family.”

Since Chief Justice Roberts’s arrival in 2005, there have been seven new justices. The only current member of the court who was serving in 2000, when Justice Jackson was a law clerk, is Justice Thomas.

After she was sworn in last month, Justice Jackson alluded to the fact that her appointment as the first Black woman to serve on the court was a milestone. “I am truly grateful,” she said in a statement, “to be part of the promise of our great nation.”

Justice Breyer, in his own statement, said his successor would fit in well at the court. “I am glad for my fellow justices,” he said. “They gain a colleague who is empathetic, thoughtful and collegial.”

Those qualities, coupled with her familiarity with the inner workings of the court, may serve Justice Jackson well. But the court’s six-member conservative majority seems poised to assertively push the law to the right, and its most junior member will have little ability to slow, much less to thwart, its ambitions.

A momentous term. The U.S. Supreme Court issued several major decisions during its latest term, including rulings on abortion, guns and religion. Here’s a look at some of the key cases:

School prayer. In Kennedy v. Bremerton School District, the court ruled that a Washington football coach at a public high school had a constitutional right to pray at the 50-yard line after his team’s games.

Separation of church and state. In Carson v. Makin, the court ruled that a Maine program that excludes religious schools from a state tuition program is a violation of the free exercise of religion.

It may, in any event, take some time for Justice Jackson, who spent most of her judicial career as a trial judge, to feel comfortable with the court’s work.

Justice Thomas, who joined the court in 1991, said he had asked his new colleagues how long it would take to feel comfortable. “To a person, they said it took three to five years under normal circumstances to adjust to the court,” Justice Thomas said in 1996.

That is the usual estimate. “So extraordinary an intellect as Brandeis said it took him four or five years to feel that he understood the jurisprudential problems of the court,” Justice Felix Frankfurter wrote of Justice Louis D. Brandeis, who sat on the court from 1916 to 1939.

But Justice Jackson’s experience as a law clerk may speed her acclimation. Six of the 10 justices who were once Supreme Court clerks sit on the current court: Chief Justice Roberts and Justices Jackson, Elena Kagan, Neil M. Gorsuch, Brett M. Kavanaugh and Amy Coney Barrett.

Still, the court Justice Jackson knew in 2000 was a different place, even though then as now, it was dominated by Republican appointees. Indeed, it was in that sense even more lopsided, with seven justices named by Republican presidents rather than the current six.

But the justices’ partisan affiliations in those days did not reliably predict their votes.

Two of the members of the court appointed by Republicans — Justices John Paul Stevens and David H. Souter — were liberals. Another two — Justices Sandra Day O’Connor and Anthony M. Kennedy — were moderates who leaned right. Only the remaining three — Chief Justice William H. Rehnquist and Justices Thomas and Antonin Scalia — were committed conservatives.

That meant the court’s two Democratic appointees — Justices Breyer and Ruth Bader Ginsburg — were very much in the mix on a court that could be unpredictable. Justice Jackson, though she will be part of a three-member liberal wing, will have less room to maneuver.

These days, partisan affiliations are closely aligned with voting patterns in major cases. In decisions issued last month on abortion, guns, religion and climate change, all of the six Republican appointees voted with the majority and all of the three Democratic ones were in dissent.

Consider the contrasts between the decisions Mr. Roberts noted in 2000 and their 2022 counterparts.

In 2000, the court applied principles announced in Roe v. Wade to strike down a Nebraska law that banned a late-term procedure that opponents call partial-birth abortion. Justice Breyer wrote the majority opinion in the 5-to-4 decision.

In 2000, the court was wary of prayer in public schools, ruling that organized prayers led by students at high school football games violated the First Amendment’s prohibition of government establishment of religion.

“The delivery of a pregame prayer has the improper effect of coercing those present to participate in an act of religious worship,” Justice Stevens wrote for the majority in a 6-to-3 decision. Four Republican appointees voted with the majority.

In June, in a 6-to-3 decision divided along partisan lines, the court ruled that a football coach at a public high school had a constitutional right to pray at the 50-yard line, discounting the possibility of coercion.

Perhaps the most surprising decision of the 2000 term was the 7-to-2 ruling reaffirming Miranda v. Arizona, the 1966 decision that required police officers to issue the familiar warning before interrogations. The decision had been widely criticized, and Congress tried to overturn it.

But Chief Justice Rehnquist, himself a longtime critic of Miranda, wrote for the majority that the warnings had “become embedded in routine police practice.” Since the Miranda decision had “announced a constitutional rule,” he wrote, a statute that sought to overrule it was itself unconstitutional.

In June, in a 6-to-3 decision that divided along the familiar lines, the court ruled that police officers may not be sued under a federal civil rights law for failing to administer the warnings. “A violation of Miranda does not necessarily constitute a violation of the Constitution,” Justice Alito wrote for the majority.

Justice Jackson may have hoped that she would have the summer to settle in and prepare for the major cases next term, which starts in October. But there will be activity on what critics call the court’s shadow docket before then.

Indeed, the court is considering an emergency application from the Biden administration to undo a trial judge’s ruling blocking the administration’s approach to immigration enforcement. She will probably cast her first vote in that case.

Important cases await Justice Jackson in the next term. In October alone, the court will hear arguments on the role race may play in redistricting under the Voting Rights Act, on the scope of the Environmental Protection Agency’s authority to enforce the Clean Water Act and on whether Andy Warhol committed copyright infringement by relying on a photographer’s image of the musician Prince.

The court will also hear challenges to race-conscious admissions programs at Harvard and the University of North Carolina. Justice Jackson, who served on one of Harvard’s governing bodies, has said she will recuse herself from the Harvard case. The two cases have been consolidated, but the court is likely to decouple them to allow Justice Jackson to hear the one against U.N.C.

Justice Jackson’s judicial record gives few hints about how she will rule in any of the coming cases, though it will be a surprise if she strays far from the approach of Justice Breyer, her mentor, or the two liberal members of the current court, Justices Sotomayor and Kagan.

Her arrival, though, may nonetheless be a welcome reset. As Justice Byron R. White liked to say, every time there is a new justice, “it’s a different court.”