(BALTIMORE – May 25, 2022) – The near record-high temperature in Baltimore City may have slowed the pace, but, otherwise, the balmy summer-like weather had no ill effect on the celebration of Morgan State University’s 2022 Undergraduate Spring Commencement Exercises, held on campus at Hughes Memorial Stadium on Saturday, May 21. The ceremony for the University’s most recent bachelor’s degree recipients followed the equally celebratory event at Hughes for Morgan’s master’s and doctoral degree conferees on Thursday, May 18, to complete the University’s 145 Spring Commencement.

Renowned playwright, filmmaker and author David E. Talbert, a 1989 Morgan graduate, gave the keynote address for the Undergraduate Exercises and received an honorary Doctor of Fine Arts from the University, joining two other outstanding achievers who were awarded honorary doctorates: David Burton (MSU Class of 1967) received a Doctor of Humane Letters for his work in civil rights, including his leading role in the recently successful lawsuit of a coalition supporting Maryland HBCUs against the State of Maryland, and Super Bowl quarterback Colin Kaepernick was awarded a Doctor of Humane Letters for his continuing work against systemic oppression of Black and Brown people. 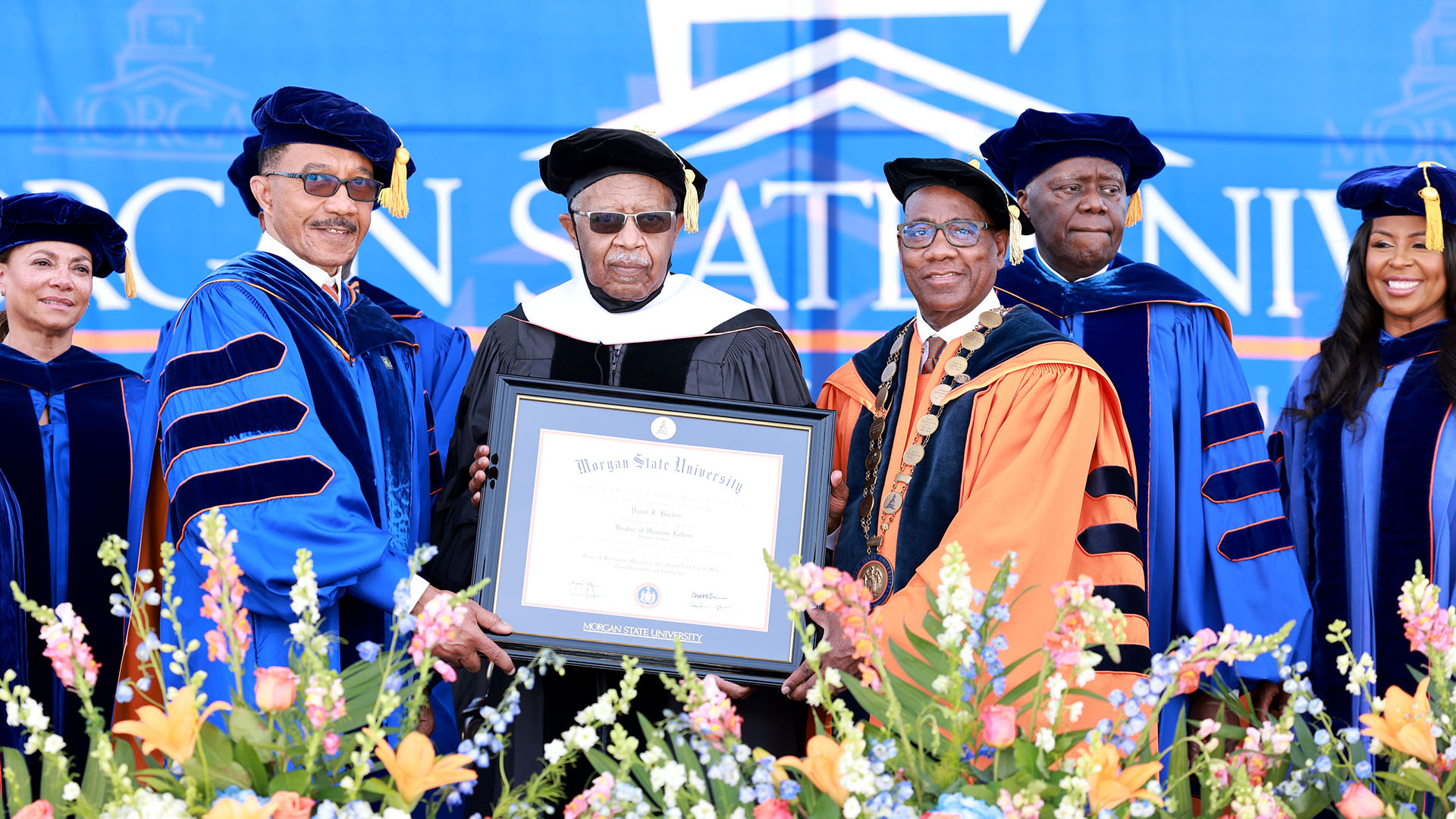 Kaepernick was not able to attend the event in person, but his inspiring video message to the gathering from the endzone of Hughes scored a touchdown, connecting Morgan’s powerful history of student-led civic activism and public service with the achievements of the Class of 2022 and making an impassioned plea for each graduate to continue being vessels of positive change beyond their years at Morgan.

A Goal of Service

A wealth of Morgan’s Spring 2022 graduates exemplified the power of those beliefs.

Khir Henderson was one of four students in Morgan’s first cohort of Secure Embedded Systems Ph.D. graduates. Raised by his father in a single-parent home, he graduated from high school a year early and came to Morgan as a first-generation college student in 2011, after a short, unpleasant stay at a predominantly white institution and a year working as a high school teacher.

Morgan, he says, “blasted away my expectations. I was not prepared for the emotional and financial support. I had great friends since the beginning, and they were there with me at graduation.” He intends to continue his “good experience” with the employer he connected with at a Morgan career fair in 2014, Johns Hopkins University Applied Physics Laboratory, Henderson says. “But ultimately, I want to solve people problems. I didn’t go to college because I wanted a lot of money. I did it because I could be helping more. And I believe I have the skills and ideals and innovative mindset that Morgan helped develop to enact those things.”

Bachelor of Science in Biology awardee Mikayla Harris took the MCAT exam less than a week before graduation, in pursuit of dual M.D. and Master of Public Health degrees, after completing her Morgan degree program in three years: “I’m applying to Howard and Morehouse School of Medicine. They’re HBCUs, of course, and I’m really looking for medical schools that serve underserved populations.

Harris came to Morgan from Northern Virginia, in search of a supportive academic environment after experiencing “a lot of racism,” she says, at her predominantly white high school. Morgan’s largely student-led RISE program and Student Research Center gave her “a huge support system” and ample opportunities to channel her passion for research, reports Harris, who has accepted employment as a medical researcher at the University of Maryland in Baltimore.

Jada Grant is on her way to Seattle with her new Bachelor of Science in Computer Science degree, to join the staff of Microsoft’s Windows and Experiences team, which she served as an intern last year. The third-generation Morganite — her mother and paternal grandfather are also MSU graduates — was also a dedicated community servant-leader during her undergraduate years, with NCNW, Black Girls Vote and Delta Sigma Theta Sorority, Inc., and she says she intends to continue on that track in Washington state.

“I definitely want to keep my foot on the pedal of political action and volunteerism,” Grant says.

Keith Witherspoon Jr., Morgan’s first Bachelor of Science in Cloud Computing graduate, grew up in multiple locations with his U.S. military family and came to Morgan four years ago after an abortive start at a predominantly white institution. At Morgan — part of his supportive “village,” he says — he compiled a stellar resume of academic, employment, extracurricular and community accomplishments, in spite of disabilities that had him hospitalized at one time. He’s slated to intern this summer with the National Institute of Standards and Technology and after that will move to Dallas to work as a site reliability engineer for JP Morgan Chase. But Witherspoon says he will continue working to empower Black people and the Black community and plans to give back to Morgan’s Cloud Computing program with his time: “It’d be selfish for me to take so much away from my four years of experience at Morgan and not make it easier on those who are coming after me.” 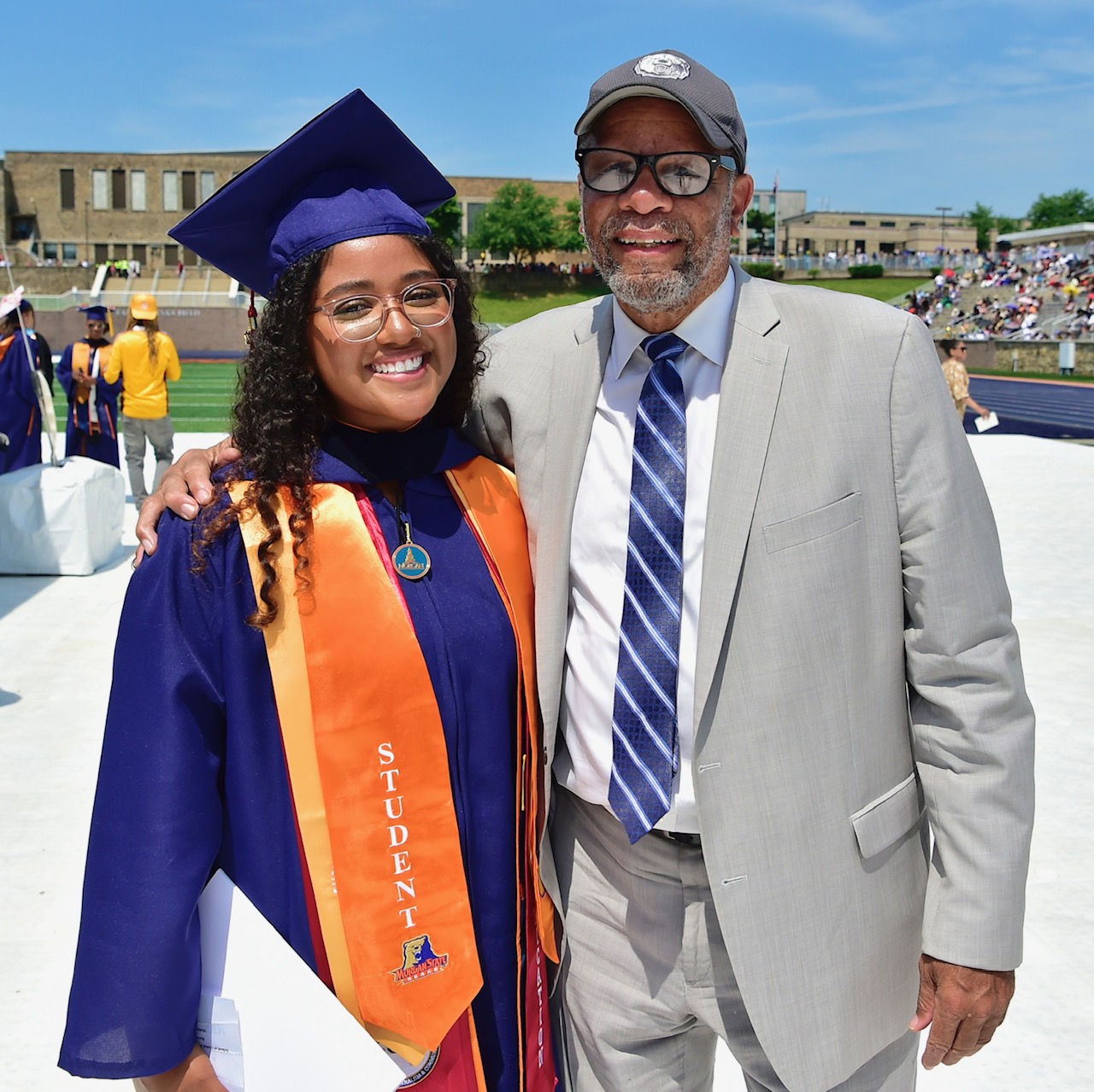 Scholar-athlete and 2021-2022 ESPN Rhoden Fellow Cayla Sweazie, Bachelor of Science in Multimedia Journalism major and starter on Morgan’s softball team, also came to Morgan in search of a supportive HBCU culture, after growing up in an affluent, predominantly white community in Northern Virginia.

“…For my whole life I’ve kind of felt like an odd man out. I play softball, so that’s also a white-dominated sport,” Sweazie says. “I knew coming to college I wanted to be in an environment that would really nurture me and care for me in both athletics and academics. So during my recruitment process, HBCUs were at the top of my list. And Morgan just really checked off all the boxes for me.”

Sweazie is on her way to Bristol, Connecticut, after her three-year undergraduate career, to join an ESPN leadership development program named ESPN Next, but she intends to remain part of Black communities, and Morgan.

“That’s definitely something I’m excited about: being connected and being an alum,” she says. Career wise, “I’m most passionate about storytelling,” she adds. “I want to work on documentaries and one day direct or produce. I want to tell stories of the athletes, especially from underrepresented communities.”

The traditional Salute to the Graduates during Morgan’s School of Graduate Studies Commencement heralded the theme of service to a greater good. Christi Owiye, MSU Master of Arts in Higher Education candidate, shared author Chimamanda Ngozi Adichie’s warning about ‘the single story’: “as you rise above these negative narratives of the stories told about yourselves, I also implore you to reject the single stories of your neighbor,” Owiye said. “I challenge you to look at people intrinsically. I challenge you to see someone else beyond the stereotypes around them and the preconceived notions that are taught to us…. As we shine as multidimensional diamonds in the sky, we share in this achievement together.”

“What is your ‘next’?” asked Sylvia-Nzinga Quinton, Ed.D. candidate in Community College Leadership. “What will be your result, your outcome, your impact?… What is your noble cause?… I offer you, regardless of where you are in pursuit of your cause: do something. Commit to something. Your first or next action does not have to be grand. Over time, little steps turn into conscious actions and intentional results.” 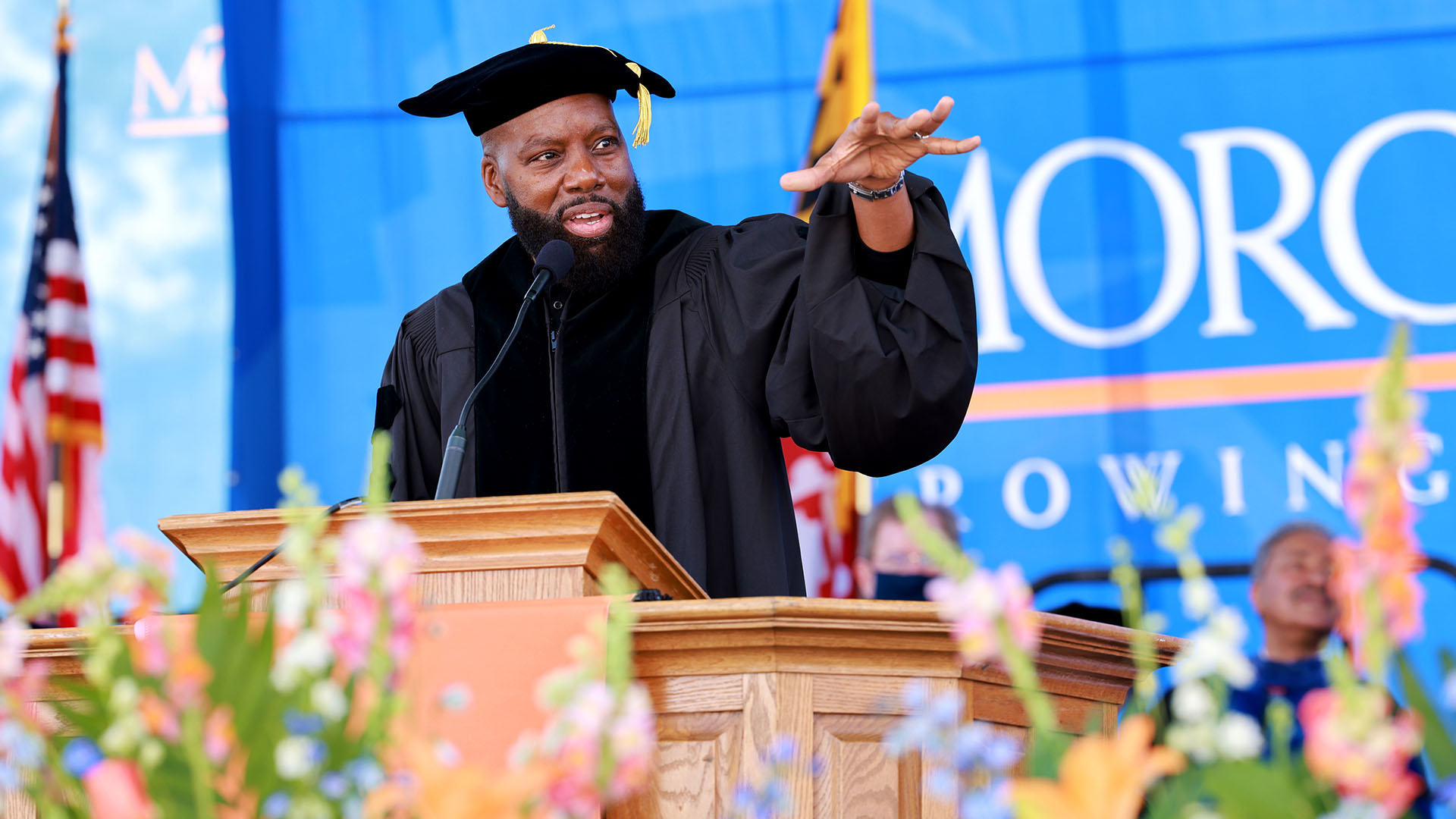 “The courage to create, the courage to introduce yourself and reintroduce yourself: that is the courage I’m imploring and expecting all of you all to summon,” Talbert said. “In every generation there is an elite group born. They’re called creators. They spin universes of artistic realities into beings from nothing. Creators stare into the empty space and see things that others don’t see, that they can’t see, that they are afraid to see. They bring music out of the silence, the colors out of the darkness, the shapes out of the shapeless. They populate our lives with the beauty and contrast that make this life worth living. Class of 2022, you are the creators.” 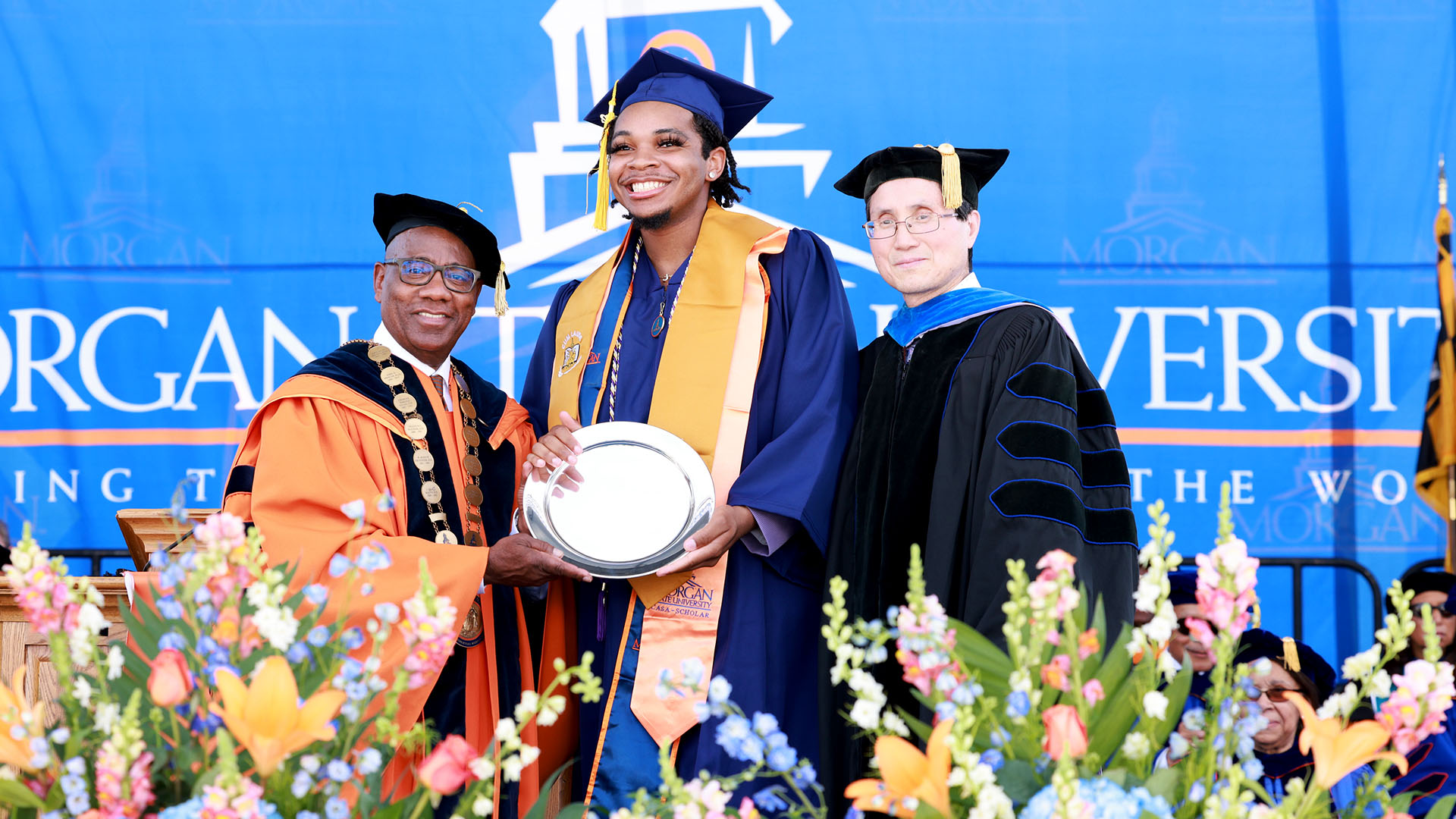 The bittersweet nature of graduation is well captured by the term widely used for it: commencement. Representing the end of one journey, graduation is also an auspicious beginning, and such was the case for the 145th Spring Commencement Exercises at Morgan. Those gathered at Hughes Memorial Stadium met a series of first-time graduates from new, high-demand programs at Maryland’s Preeminent Public Urban Research University, including Cloud Computing and Secure Embedded Systems, as well as the first degree recipient from Morgan’s College of Interdisciplinary and Continuing Studies (CICS). Established in the fall of 2021, CICS was uniquely designed to meet the needs of an ever-changing, diverse student body, specifically nontraditional students, returning students, working adults and students who need or prefer distance education. Lucy Moran received the first-ever CICS degree, a Ph.D. in Interdisciplinary Journalism and Mass Communication, during the Graduate School Commencement ceremony.

The Morgan family also bid a fond farewell to one of its longstanding pillars — a treasure within the National Treasure. Morgan State University’s director of bands for nearly 50 years, Melvin Miles, led his beloved band in the most resounding way one final time, at the Undergraduate Commencement Exercises. 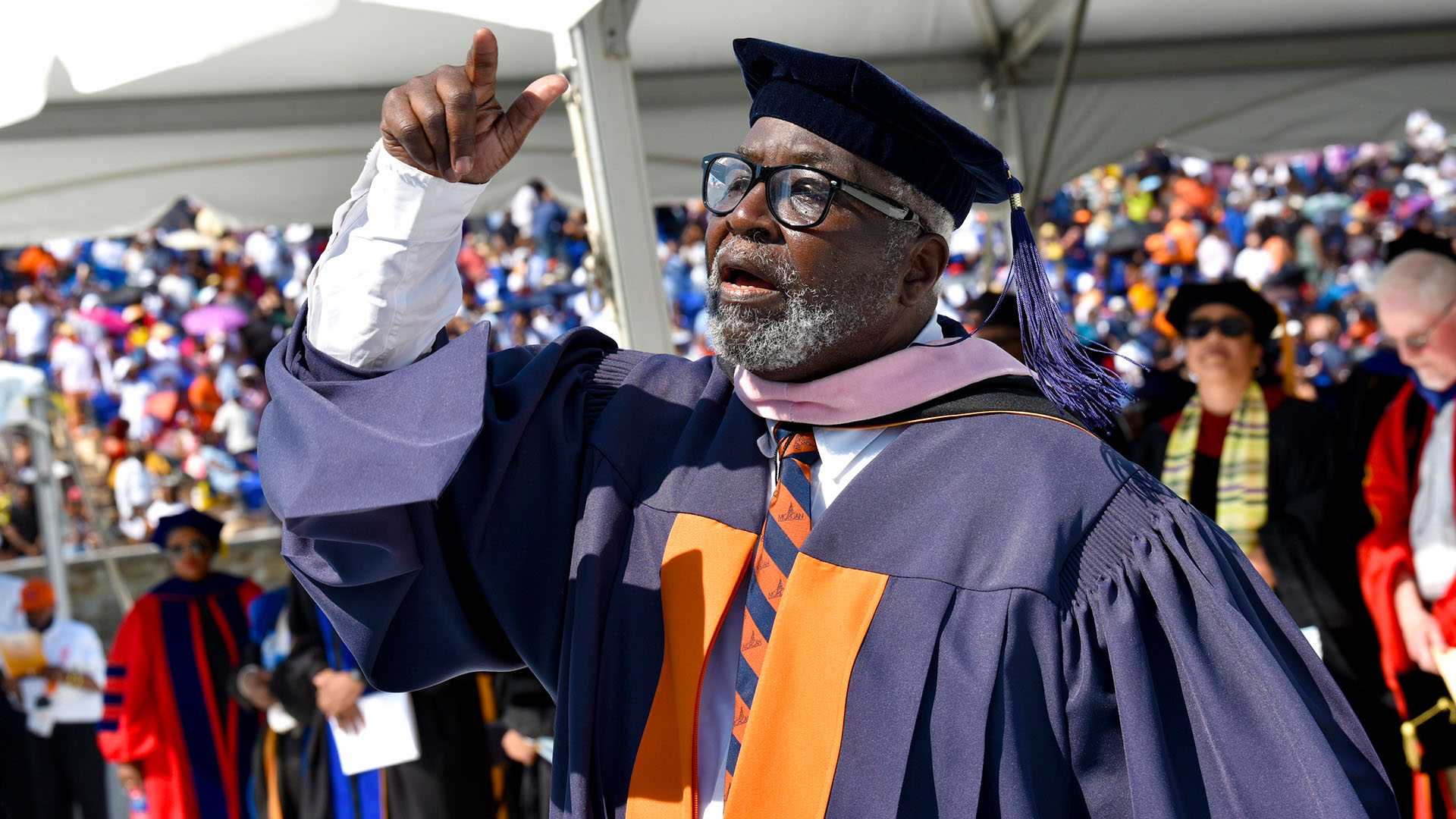 Retiring from Morgan after more than four decades overseeing the musical direction of Morgan’s Marching Band — the Magnificent Marching Machine — and the Morgan State University Jazz Ensemble, Miles left the Class of 2022 and the Morgan faithful with a tune that brought the house down.

Those gathered in Hughes stadium were graced with the most spirited rendition of the Morgan rally song, “We Are the Bears,” a fitting end (and beginning) to culminate a hallmark occasion celebrating Morgan matriculation and fidelity to alma mater.