While many people have heard of Black Wall Street in Tulsa, Oklahoma which was destroyed by an angry mob of white people May 31-June 1, 1921, there were other “Black Wall Streets”. Such is the case in Richmond, VA’s Jackson Ward. It has a rich history of black excellence and entrepreneurship.

In discussing Jackson Ward, there is one name that cannot be omitted, and that is the incomparable Maggie Lena Walker. She was the first woman to open a bank in America.

It is this kind of powerful that this Black Wall Street Movement celebrates the most. While the African American has faced innumerable challenges in this country, he/she has still been able to do the impossible. Maggie Lena Walker is a firm reminder of that rich, incredible spirit of determination that is truly at the core of our blackness. This is in stark contrast to much of what is happening in our communities today.

Who is Maggie Walker?

Maggie Lena Walker (July 15, 1864 – December 15, 1934) was an African-American teacher and businesswoman. Walker was the first American female bank president to charter a bank in the United States. As a leader, she achieved successes with the vision to make tangible improvements in the way of life for African Americans and women. Disabled by paralysis and limited to a wheelchair later in life, Walker also became an example for people with disabilities.

Walker’s restored and furnished home in the historic Jackson Ward neighborhood of Richmond, Virginia has been designated a National Historic Site, operated by the National Park Service.

According to biographical material she supplied, Walker was born as Maggie Lena Mitchell in Richmond, Virginia, to Eccles Cuthbert and Elizabeth Draper Mitchell two years and two months after the end of the American Civil War. Census information, as well as a diary passage saying that she was four years old on her mother’s wedding in May 1868, with William Mitchell, set the date back to 1864 or 1865. Her mother was a former slave and an assistant cook in the Church Hill mansion of Elizabeth Van Lew, who had been a spy in the Confederate capital city of Richmond for the Union during the War, and was later postmistress for Richmond. Her father was a butler and writer.

The Mitchell family moved to their own home on College Alley off of Broad Street nearby Miss Van Lew’s home where Maggie and her brother Johnnie were raised. The house was near the First African Baptist Church which, like many black churches at the time, was an economic, political, and social center for the local black community. After the untimely death of William Mitchell, Maggie’s mother supported her family by working as a laundress. Young Maggie attended the newly formed Richmond Public Schools and helped her mother by delivering the clean clothes.

When she was fourteen years old, young Maggie joined the local council of the Independent Order of St. Luke. This fraternal burial society, established in 1867 in Baltimore, Maryland, administered to the sick and aged, promoted humanitarian causes and encouraged individual self-help and integrity. She served in numerous capacities of increasing responsibility for the Order, from that of a delegate to the biannual convention to the top leadership position of Right Worthy Grand Secretary in 1899, a position she held until she died.

She taught grade school for three years until 1886, when she married Armstead Walker Jr., a brick contractor. Her husband earned a good living, and she was able to leave teaching to take care of her family and work with the Independent Order of St. Luke. Maggie and Armstead Walker Jr. had sons, Russell and Melvin, and purchased a home in 1904.

In 1902, she published a newspaper for the organization, “The St. Luke Herald.” Shortly after, she chartered the St. Luke Penny Savings Bank. Mrs. Walker served as the bank’s first president, which earned her the recognition of being the first woman to charter a bank in the United States.[3] Later she agreed to serve as chairman of the board of directors when the bank merged with two other Richmond banks to become The Consolidated Bank and Trust Company, which grew to serve generations of Richmonders as an African-American owned institution.

Tragedy struck in 1915 when her husband was accidentally killed, leaving Mrs. Walker to manage a large household. Her work and investments kept the family comfortably situated. When her sons married they brought their wives to 110​1⁄2 East Leigh Street, her home in Richmond’s Jackson Ward district, the center of Richmond’s African-American business and social life around the start of the 20th century.

Walker received an honorary master’s degree from Virginia Union University in 1925, and was inducted into the Junior Achievement U.S. Business Hall of Fame in 2001.

In Maggie’s honor Richmond Public Schools built a large brick high school adjacent to Virginia Union University. Maggie L. Walker High School was one of two schools in the area for black students, during the period of racial segregation in schools; the other was Armstrong High School. After generations of students spent their high-school years there, it was totally refurbished to reopen in 2001 as the regional Maggie L. Walker Governor’s School for Government and International Studies.

The St. Luke Building held the offices of the Independent Order of St. Luke, and the office of Maggie L. Walker. As late as 1981, Walker’s office was being preserved as it was at the time of her death in 1934. The building was listed on the National Register of Historic Places in 1982. 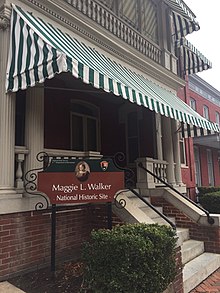 The National Park Service operates the Maggie L. Walker Historic Site at her former Jackson Ward home. In 1978 the house was designated a National Historic Site and was opened as a museum in 1985. The site states that it “commemorates the life of a progressive and talented African-American woman. She achieved success in the world of business and finance as the first woman in the United States to charter and serve as president of a bank, despite the many adversities. The site includes a visitor center detailing her life and the Jackson Ward community in which she lived and worked and her residence of thirty years.The house is restored to its 1930’s appearance with original Walker family pieces.”

Walker was honored as one of the first group of Virginia Women in History in 2000.

On July 15, 2017, a statue of Walker, designed by Antonio “Toby” Mendez was unveiled on Broad Street in Richmond. The bronze, 10-foot statue shows a depiction of how she lived, with her glasses pinned to her lapel and a checkbook in hand.