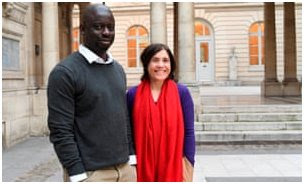 Felwine Sarr and Bénédicte Savoy were asked by the French president, Emmanuel Macron, to look into the issue of looted African artworks held in the country’s museums. Photograph: Alain Jocard/AFP/Getty Images
A report commissioned by Emmanuel Macron will call for thousands of African artworks in French museums taken without consent during the colonial period to be returned to the continent.

Unless it could be proven that objects were obtained legitimately, they should be returned to Africa permanently, not on long-term loan, said the authors of the report, the Senegalese writer and economist Felwine Sarr and the French historian Bénédicte Savoy.

They have recommended changing French law to allow the restitution of cultural works to Africa, after Macron announced that he wanted it to begin within five years.

“I cannot accept that a large part of the cultural heritage of several African countries is in France,” the French president said last year in Ouagadougou, the capital of Burkina Faso. “There are historical explanations for this but there is no valid, lasting and unconditional justification. African heritage cannot be only in private collections and European museums – it must be showcased in Paris but also in Dakar, Lagos and Cotonou. This will be one of my priorities.”

The extent to which France, Britain and Germany looted Africa of its artefacts during colonialism is not known, but according to the report, which will be released this Friday, about 90% of Africa’s cultural heritage currently lies outside the continent.

The report’s authors travelled to Mali, Senegal, Cameroon and Benin and looked through the works held by the Musée du quai Branly, a museum focused on non-European cultures in Paris, and found that about 46,000 of its 90,000 African works were “acquired” between 1885 and 1960 and may have to be returned. 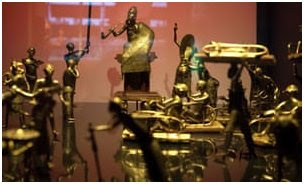 African artwork displayed in Paris depicting the Ato ceremony of the Kingdom of Dahomey, circa 1934. Photograph: Gérard Julien/AFP/Getty Images

The report could pave the way for other former colonial powers to consider the provenance of their own collections. British troops destroyed much of the beautiful city of Benin in 1897, burning the royal palace to the ground and looting 4,000 works of art, including elegant brass heads and intricate plaques depicting war exploits, known as the Benin bronzes.

On Tuesday, the governor of Easter Island in the Pacific tearfully begged the British Museum to return one of its famous statues. The London museum has held the Hoa Hakananai’a, one of the most spiritually important of the Chilean island’s stone monoliths, for 150 years.

The British Museum in London has about 700 articles from Benin, and about 100 of them are displayed in an underground gallery. Several European institutions including the British Museum plan to “lend” works to a new museum in Benin City, in modern-day Nigeria, due to open in 2021. The security of African works is sometimes cited as a reason not to hand them over to African museums.

The systematic looting of African art took different forms: the researchers found that as well as being the spoils of war, theft and pillage, many of the works had been “bought” for fractions of their real value.

A law would need to be passed in France to change the code of patrimony, and then African countries would have to request that their stolen works be returned. They would be better equipped than ever to do so, because the researchers have sent them lists of the objects.

“Travelling in Africa, we saw the effect that these inventories can have, especially on museum directors,” Savoy told Libération. “They never had access to these lists, and never in such a clear and structured way. Highly knowledgeable researchers and teachers were really incredulous when we told them there were so many of their countries’ objects at quai Branly.”

To start with, they have recommended that palace doors, thrones and statues stolen from Abomey be returned – something the modern-day country of Benin has long requested.

“Today it feels as if we’re just a step away from recovering our history and being finally able to share it on the continent,” said Marie-Cécile Zinsou, the daughter of Benin’s former prime minister and the president of the Zinsou Art Foundation in Cotonou.